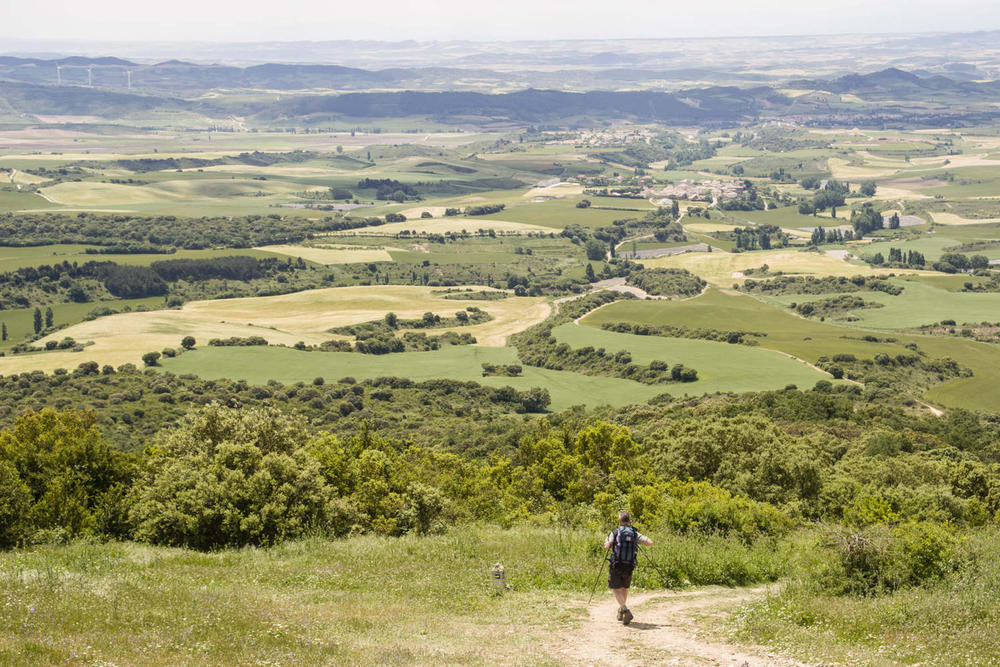 Our Camino trips are not designed to make you a pilgrim. We can't guarantee forgiveness for your lockdown sins; the gluttony of those Netflix binges, your pride at the grandchildren's self-isolation artwork, your envy at your friend's perfect homes on Zoom (as if they're going to show you the messy parts).

What we can offer you, at some point, are open walking trails and a much needed change of scenery. But why have one change of scenery, when you can have many? On the Camino Francés we can have you walking through the foothills of the Pyrenees, the vineyards of La Rioja, the rolling plains of Castile and the forests of Galicia. Then by linking the Francés and the coastal Camino del Norte via an ancient route to important relics hidden in the depths of the Picos de Europa, we can add high mountains a green and wild coastline to that impressive list of landscapes. And we need not stop at Santiago...

So here, in 10 photos, is an exclusive preview of our new Three Caminos Inn to Inn. If you want to see the full trip details, you need only ask. 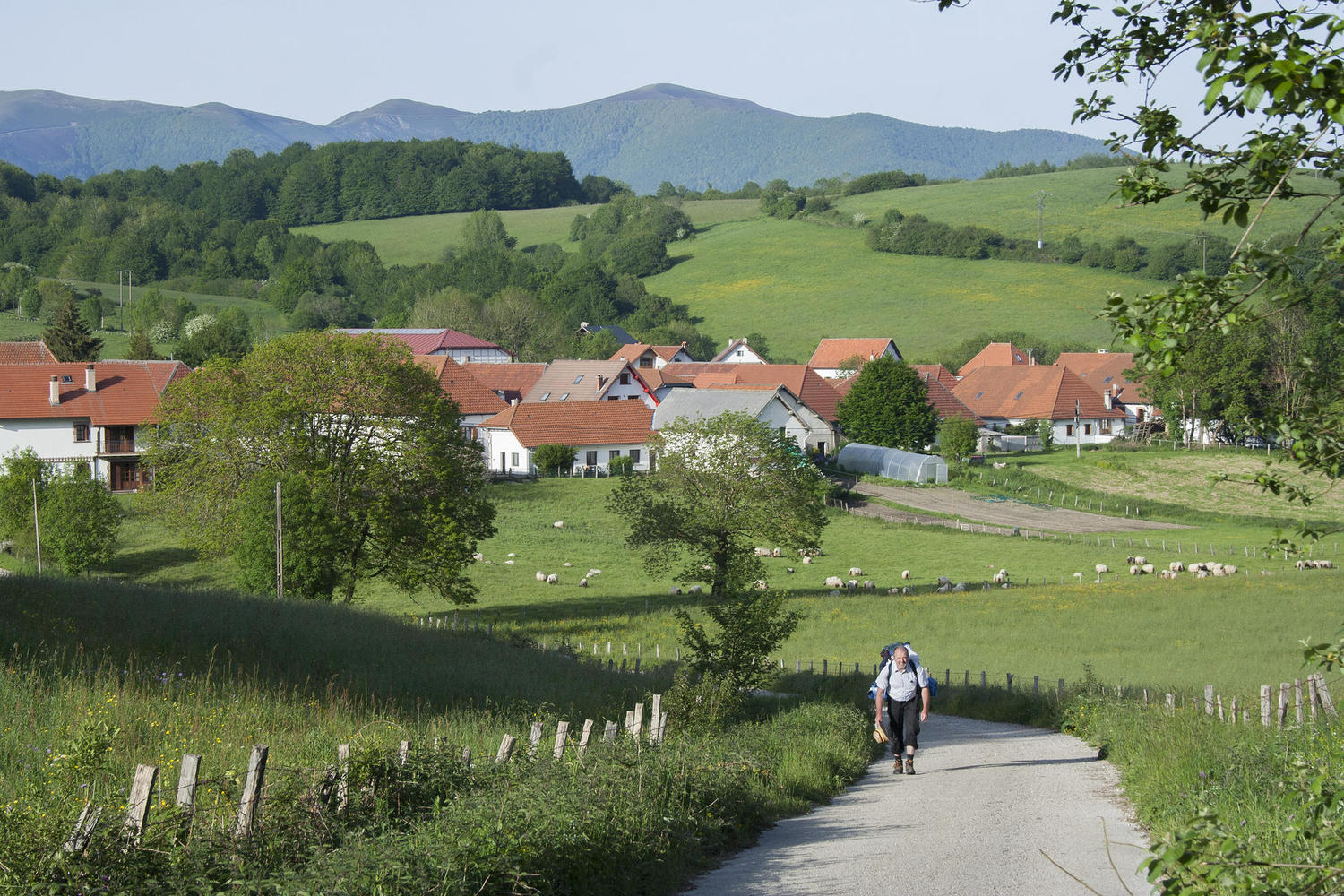 Leaving the Pyrenees behind

Roncesvalles is still the start point for many of the pilgrims who walk the 800 km of the Camino Francés. You will also start here, spending your first night in a beautiful converted monastery no less. Between here and Pamplona are beech forests full of old witchery stories, pastoral landscapes where sheep graze lazily and small Basque villages with colourful wooden shutters. 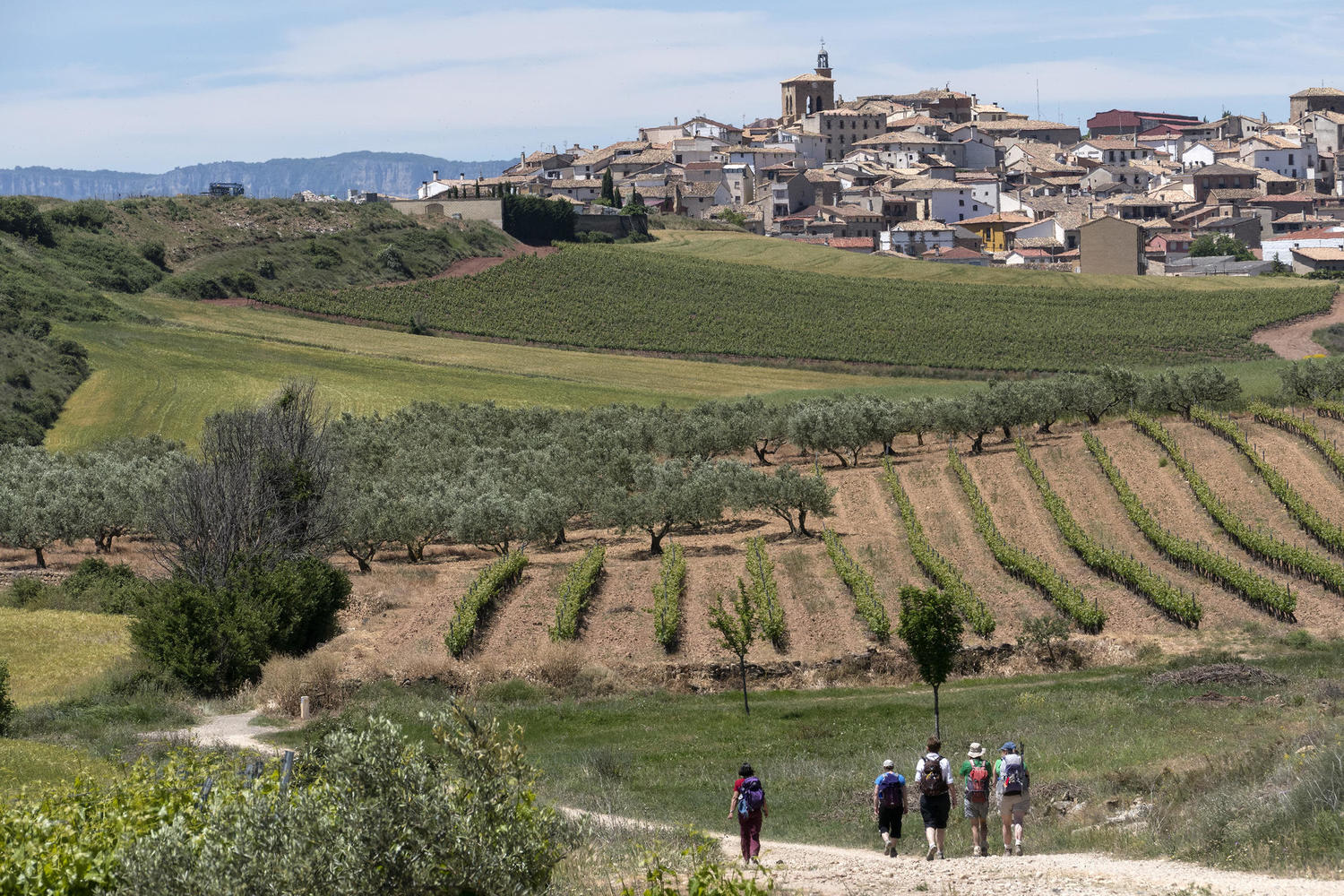 Walking towards Cirauqui in the low lands of Navarre

When you come out of the Pyrenees and cross the hills, you emerge to a landscape that is more recognisably 'Spanish'; rolling hills, vineyards, sandstone villages and olive trees. But it’s not just what the eyes can see, but the smells and sounds too. Wild fennel, sage, wild flowers and blossom surround the path and perfume the air. Birds cheep, church bells ring, people talk. 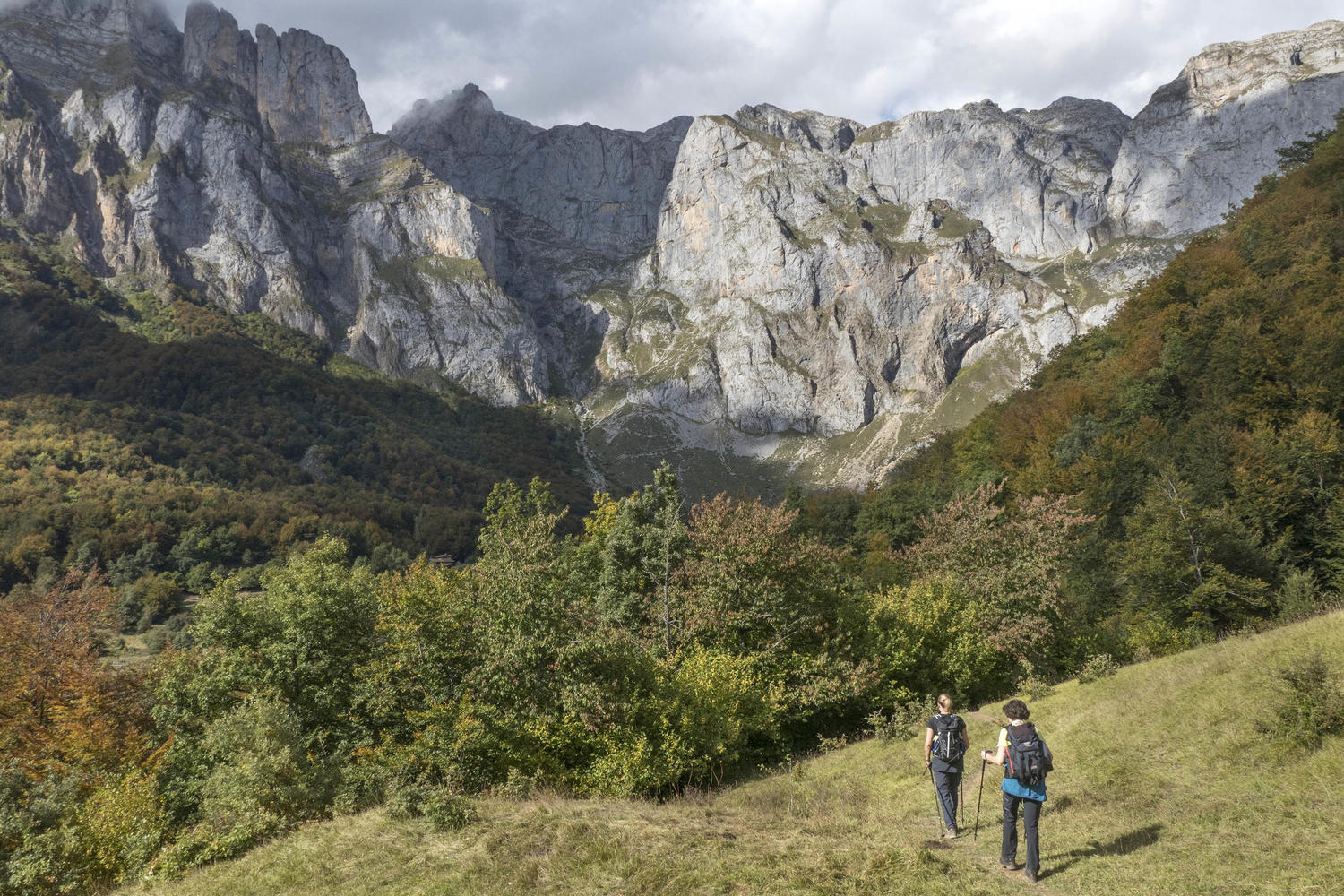 Arriving to Fuente De in autumn

Cutting inland along the old Camino Vadiniense brings us onto our second Camino and into the heart of the Picos de Europa. At Fuente Dé, the cable-car provides a spectacular ride up 1,000m to the upper reaches of the mountains. The contrast with the green valley floor is striking as you step out into a moon-like landscape of splintered rocks, jagged peaks and deep ravines. You will usually see chamois goats perched on the cliffs and vultures circling below. From here you can walk up to a high peak for fantastic views. 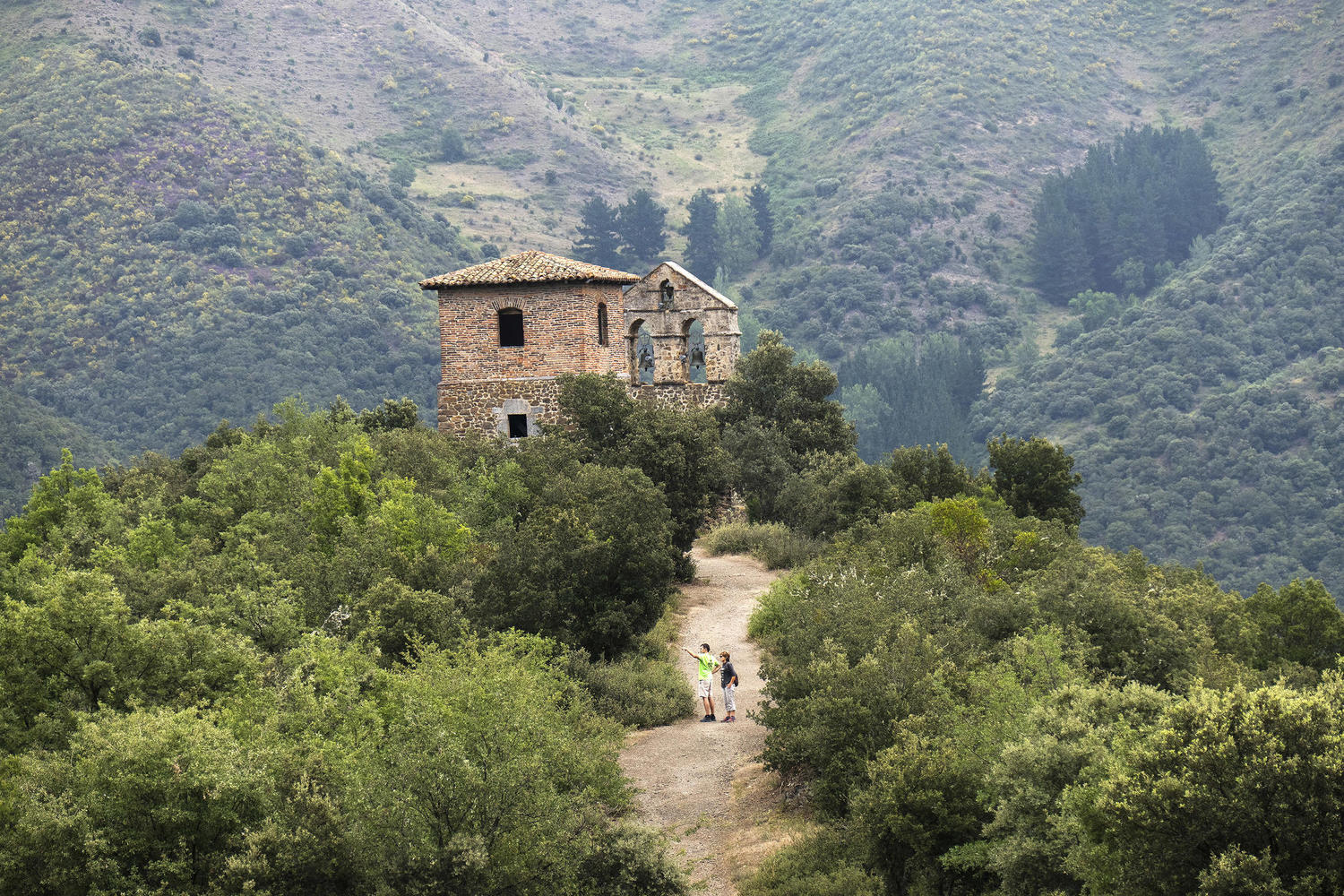 Pilgrims normally avoided the high mountains. There needed to be a good reason to confront big slopes, colder temperatures and remote inhabited areas. But in the hidden valley of Liébana, in the foothills of the Picos de Europa, there was a good reason to detour from the Camino del Norte. The Lignum Crucis - one of the largest pieces of the Holy Cross - was hidden in the Santo Toribio Monastery since the 8th century and pilgrims followed the Camino from the coast to worship it. 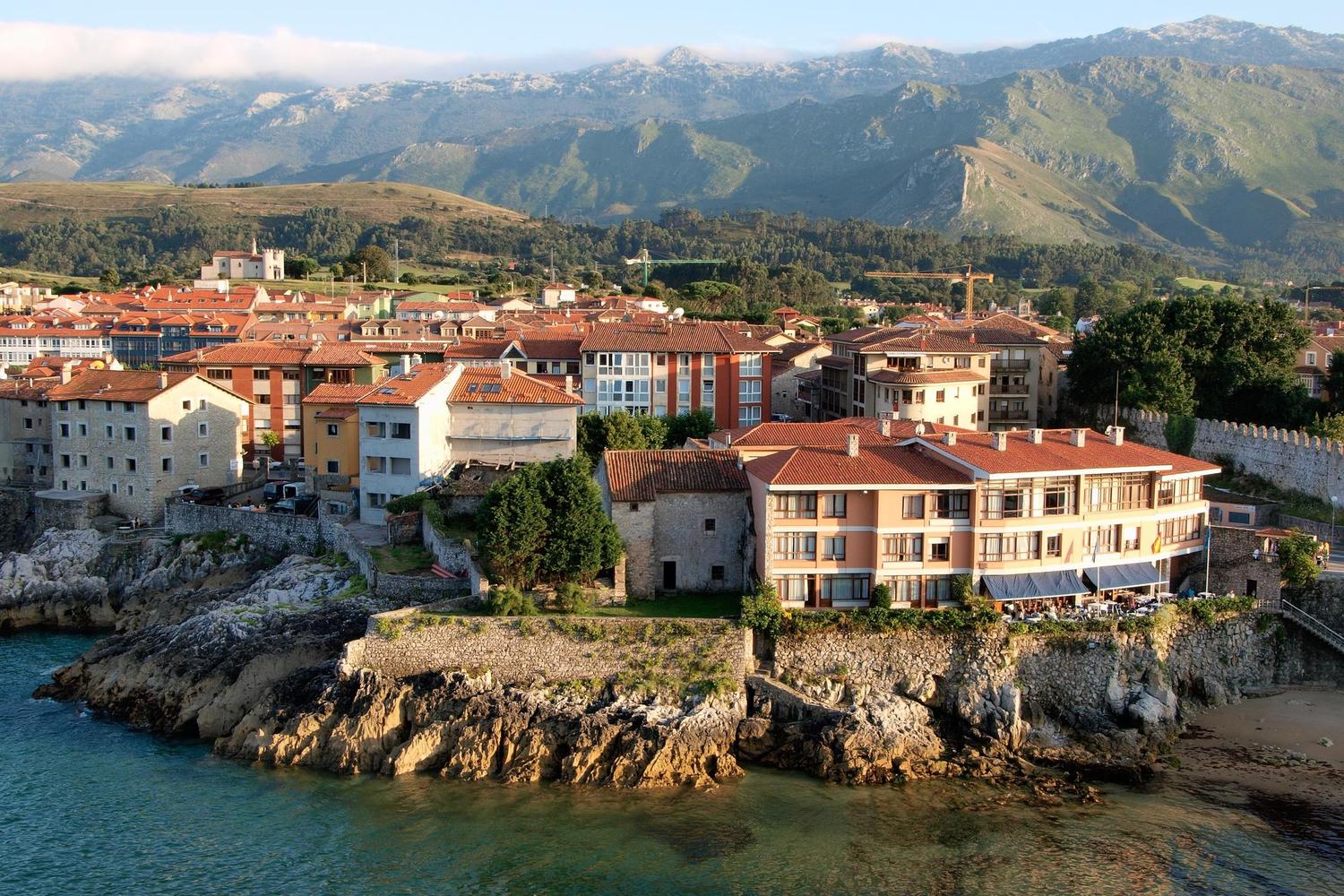 The pretty waterfront of Llanes with the Picos mountains behind

A particularly beautiful stretch of the Camino del Norte links the fishing towns of Llanes and Ribadesella in Asturias; sections of untouched coast with views towards the Picos summits. Small villages and thousand-year-old monasteries fill the landscape inland, whilst to your right the ocean offers a sight of either gentle calm or of anger. When the big waves hit the limestone cliffs in high tide, water is pushed through the cracks and comes shooting out in spectacular blowholes which rise up to 20 meters high. 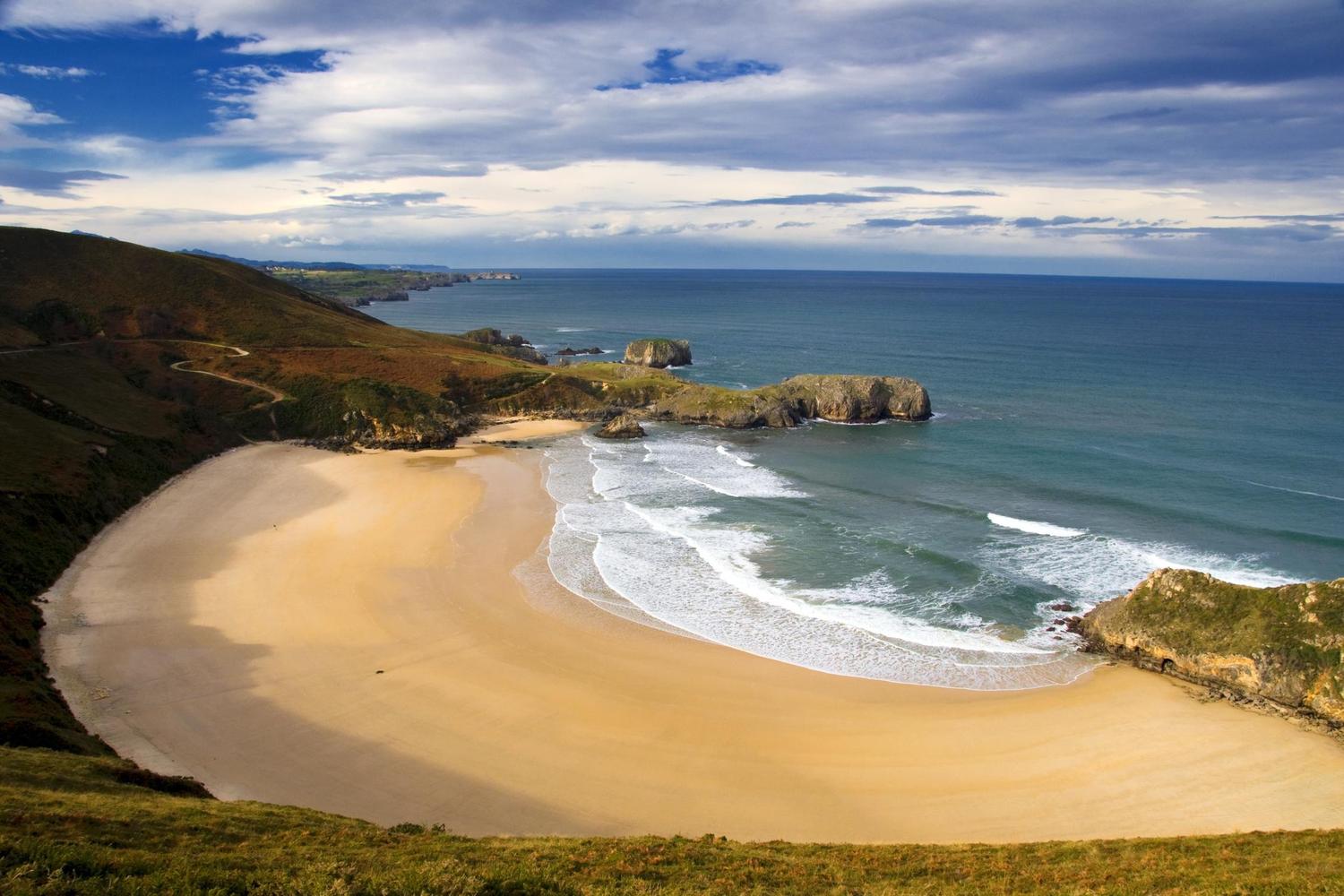 The Camino del Norte along Spain's Costa Verde (Green Coast) was actually the route that most pilgrims followed for the many centuries, as the border with Islam was still not far from the Cantabrian mountains. As the Christian kingdoms pushed these borders south, the courts moved with it and the new cities were built in the central plateau, shifting the pilgrims to walk along the easier central plateau. This has left this the Northern Camino with less monumental heritage, but with a wilder landscape and less footfall. 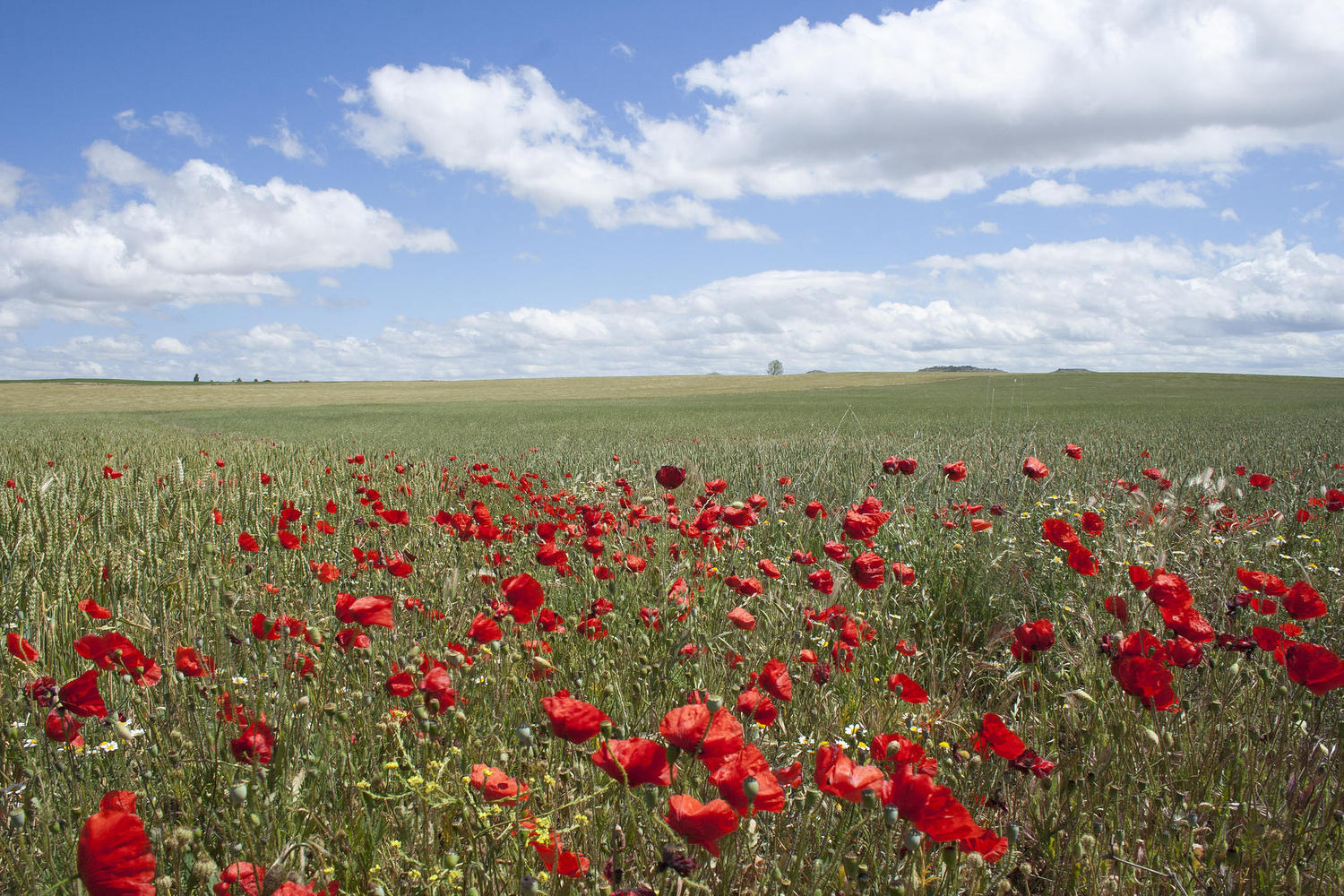 Spring in the cereal granary of Spain

It is always beautiful and inspiring to walk below the infinite skies of Castile and León. This is the granary of Spain - the cereal fields of the high plateau. The long section of plains come to an end as you approach the old Roman town of Astorga, a crossroad of routes since ancient times and gateway to the high mountains that appear in the distance, the last challenge before reaching Santiago. 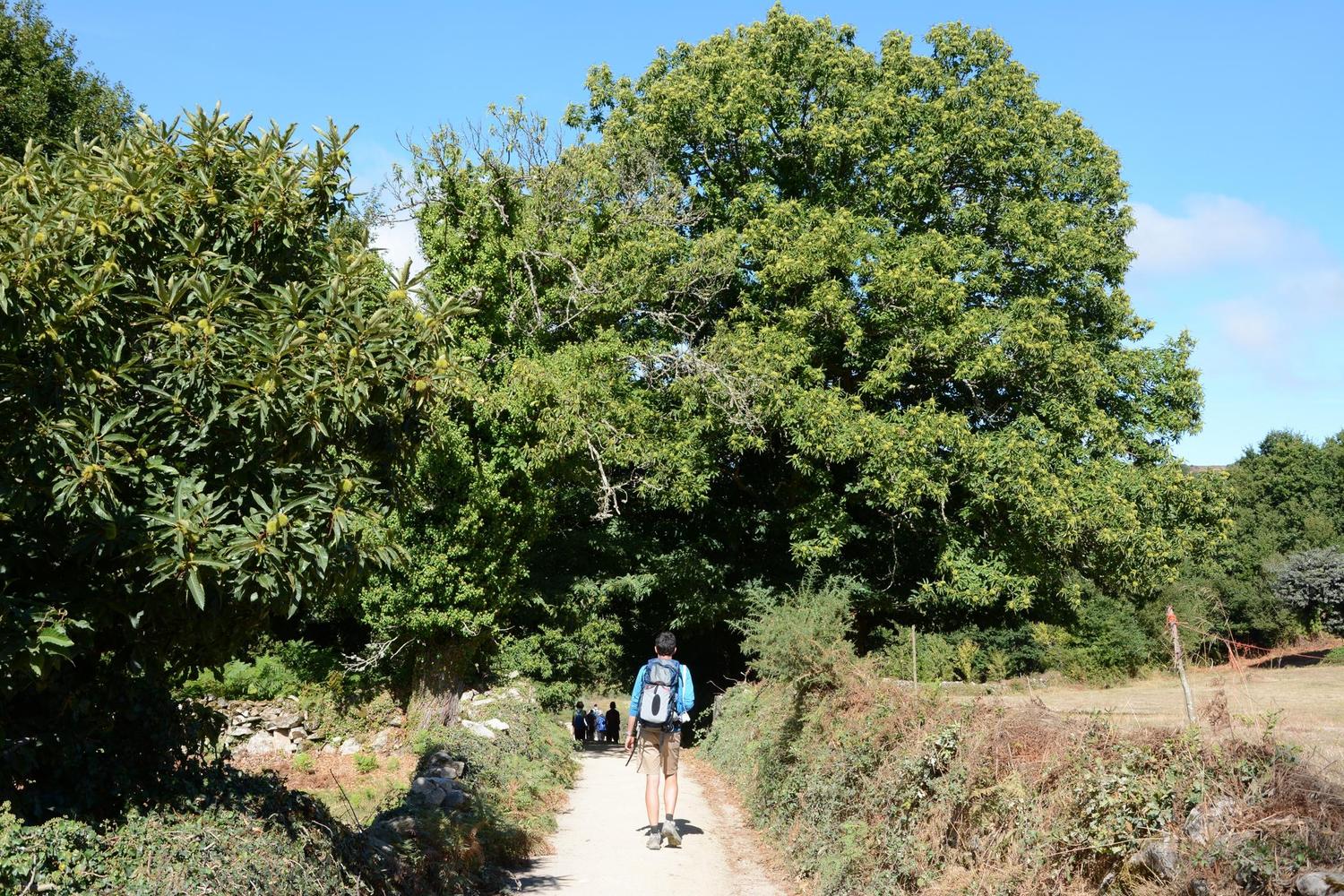 The last 100km of the Camino de Santiago

No pain, no gain... that's what you have to think as you climb up the slopes that separate the central plateau from the green pastures of Galicia. After days on the dry plains, for most pilgrims it's most welcome to return to lush forests of oaks and chestnut trees. And although the hill is challenging it does not take too long to be high in the mountain and admiring the wide views. 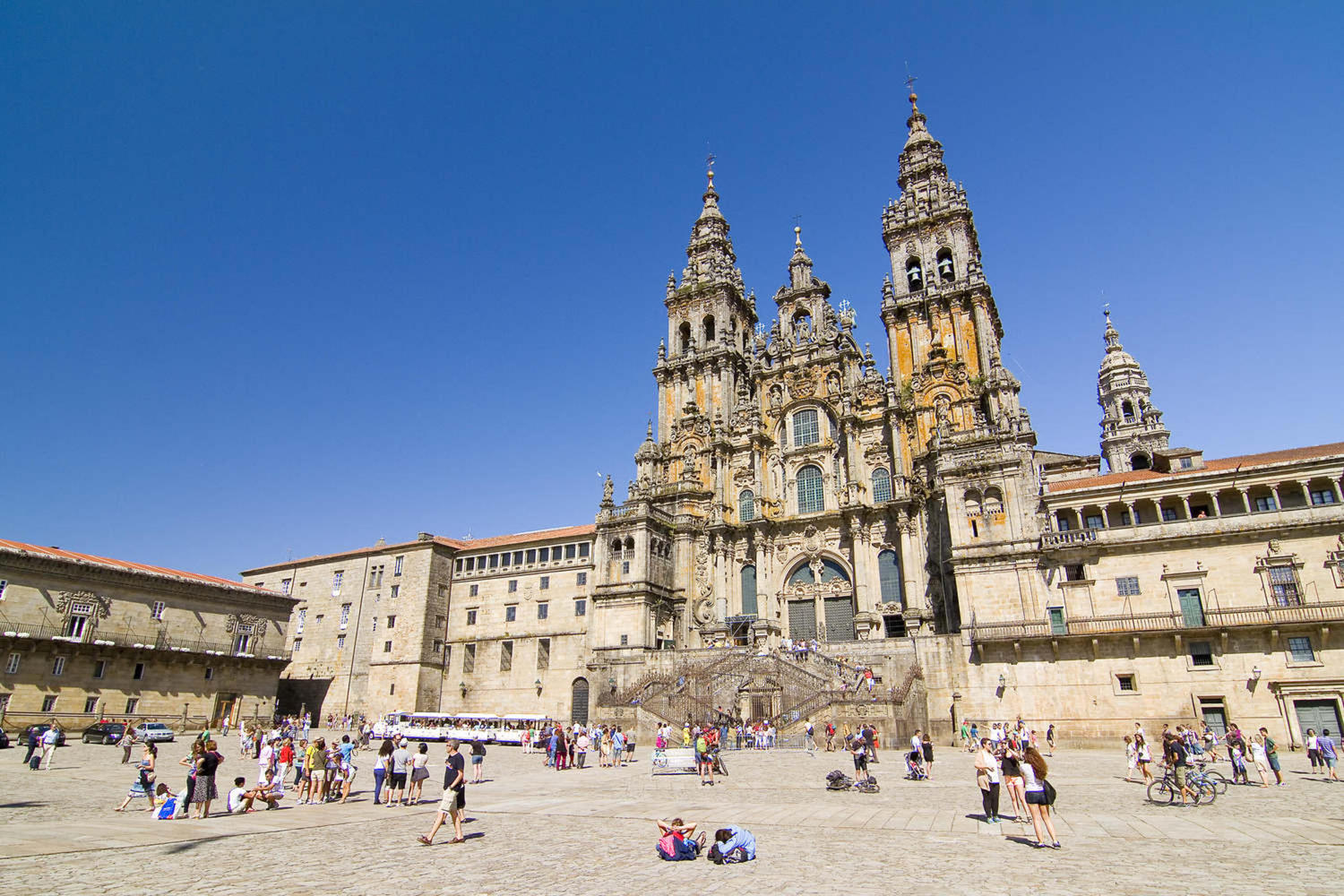 View of Obradoiro square and Cathedral of Santiago

A grey granite city it may be, but Santiago is a joyful place. You have 300,000 people a year arriving here happy as Larry for not having to walk any more, with a huge feeling of achievement and peace in their hearts. Santiago is not short of monuments and cultural visits. But once you have visited the Apostle in the Cathedral and you have been blessed by the Botafumeiro scents, most people just meander around town, happy to be there, running into other people they met along the way and sharing stories of their Camino. 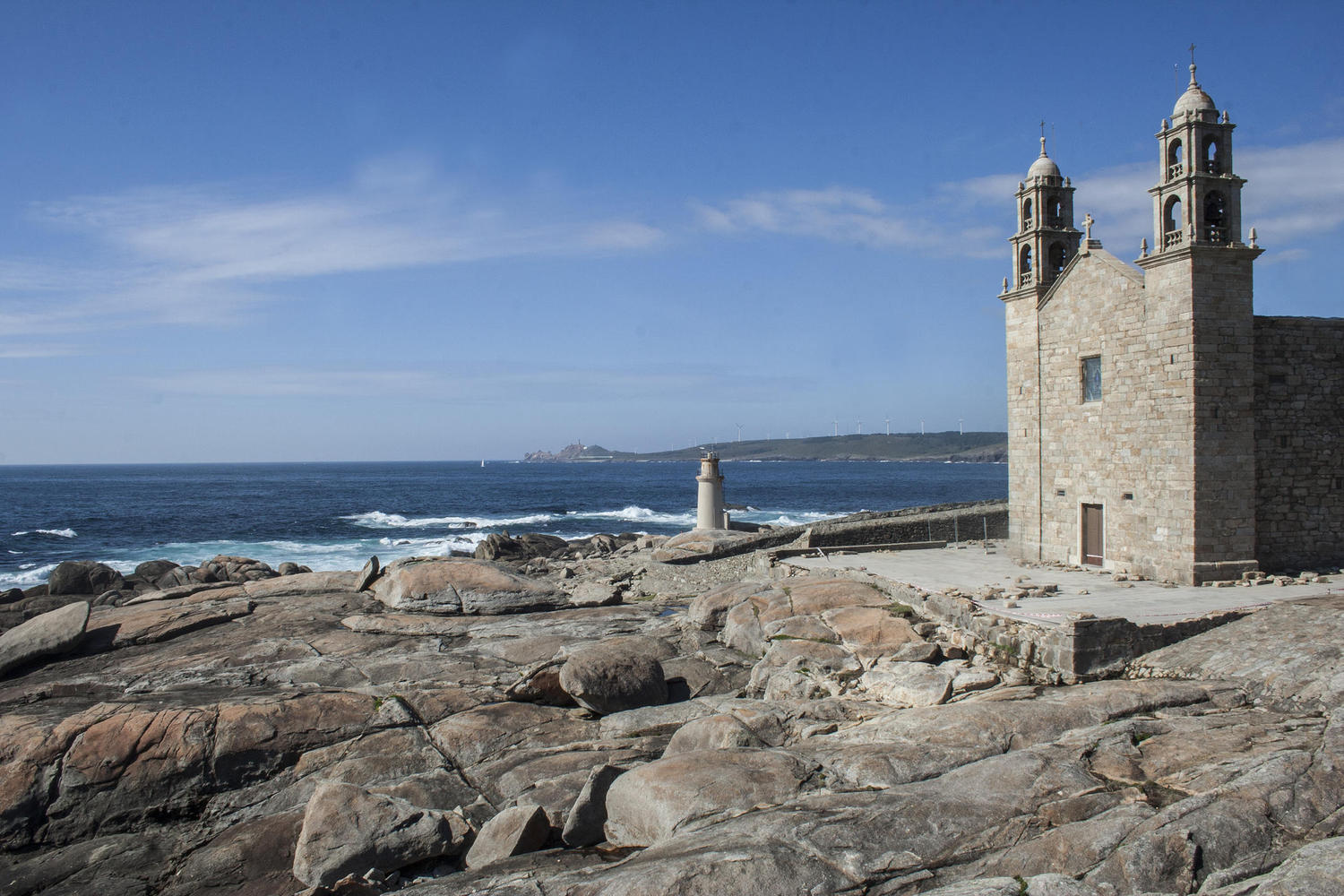 The Virxe da barca sanctuary in the Death Coast of Galicia

Finisterre - Land's End - was the westernmost point of the Old World before the discovery of the Americas and there are records of ancient pilgrimages to this coast to worship the sun as it fell from the horizon into the unknown. This wild Galicia coast is known as the Death Coast for the numerous fishing accidents provoked by its rough seas and rocky cliffs. But on a more joyful note, it’s also known for its stunning sea food, so coming here is a great way of celebrating with a special post-Camino meal.